The first time I knew Amsterdam was different was on SK 821.

Please allow me to explain. On said flight, I was seated at the rear corner of a Scandinavian Airlines 737-600 next to a man named Hasan (name changed) in the middle seat, and some lady whose “Dynasty” hairstyle was in conflict with her youngish clothes, the tattoos on her forearm, and her obvious refusal to accept middle age gracefully.

I was planning to sleep the entire flight, as I was unable to sleep on the overnight flight from Florida that I had just connected from, but Hasan struck up a conversation with me. Hasan appeared to be in his late thirties with a face that had been prematurely weathered by nature. He looked like an aged, leathery version of the rapper Pitbull, dale’. I found out that he was a journalist by education and trade, but made his living as a watersports instructor in his hometown of Ankara in southern Turkey, and only needed to work during the summer months. The rest of the year, he travelled the world and met with old friends and people he had met while teaching parasailing, jetskiing, and the like.

“He looked like an aged, leathery version of the rapper Pitbull, dale’.

We traded the same type of banter travelers everywhere do- we traded stories of sketchy Russians (I’m willing to wager that every man who has travelled extensively has a “drinking Vodka with sketchy Russians” story), and complained about the high prices in Norway. It turns out he was in Norway visiting with the “Dynasty” lass for a bit, and she was now coming to stay with him in Turkey for a while. By training, she was a nurse or something like that, but she did nails (“I’m a nail artist“, she corrected) and hair for a living in northern Norway, which is more or less the same as Antarctica for 6 months every year. After I learned where she lived, it was easy to imagine how she could at least be a moderately successful hairdresser in 2015 and get away with wearing that hairstyle.

Sometime during the time Hasan was prattling to me about places he had been- it had mostly been a one-way conversation up to this point- I realized he was high on something; probably depression pills or alcohol like the rest of the people in Scandinavia. As if on cue, he broke the conversation, fished into his sidebag, pulled out a bag of marijuana and rolling papers and began rolling spliffs; presumably to use in Amsterdam. I didn’t bother to ask how he was able to avoid getting caught with so much weed at the airport in Norway, but I put two and two together to realize that if a man wasn’t afraid of walking through an international airport terminal with a bag of weed this size, then the city we were arriving in was completely different than the other European cities I was familiar with.

As I mentioned before, it was mostly a one-way conversation up to this point. Hasan is one of those conversationalists who isn’t actually a conversationalist, but a speaker. I don’t know if he’s naturally like that when he isn’t medicated, but it’s easy to imagine that he is so well-travelled that he’s used to having people defer to him in conversations, just as many intelligent or well-read people rule over conversations are when they’re in less sophisticated company. Some people would also assume that he had ADD or ADHD, but I don’t believe these things exist; I think there are some folks who are just rude, inconsiderate, attention-seeking, narcissistic or have no home training. For example: after he rolled his first spliff and placed it inside a tiny plastic pouch, I told him he should visit Jamaica sometime. Instead of asking me when I had been there, my experiences there, or why I thought he should visit, he either assumed all the facts himself or assumed it was my invitation to spend 15 minutes talking about why I should visit Cambodia, because that’s what he did.

I slept for the final 30 minutes or so of the 1 hour, 45 minute flight. We landed in Amsterdam-Schoebel Airport (AMS). During our taxi, which is infamously known among flight crew as the world’s longest, I felt as if I had descended into an alternate utilitarian reality. There was a row of perfectly identical charcoal-colored office buildings behind the airport terminal that seemed to be the only tall buildings around. We drove over a highway, and passed a perfectly aligned group of KLM 777’s on the tarmac that dwarfed our comparatively tiny 737. Upon arrival, the only things that seemed familiar were the restaurants and shops in the airport terminal, and the cold, overcast weather, which was probably imported directly from London in some postwar bilateral trade agreement.

“Deal”, said Amsterdam, “let’s drink Heineken and toast to the memory of our megalomaniacal colonialization of the entire world, and the racial discrimination that we Dutch created and European exceptionalism that you English perfected.”

In a corner off to the side, France was guzzling wine straight from the bottle and complaining that he, in fact, had been the best colonizer of the world, and he, in fact had perfected exceptionalism and everything else in the dictionary. Spain and Portugal weren’t even drinking, but were bickering instead, and Russia and China were in the back stealing everyone else’s cars, confident in the fact that even though they were the most recent kings of colonialism, at least they actually paid people to cut sugarcane.

…The Red Light district… is a collection of (probably) drugged-up and (most likely) human-trafficked scantily-clad mannequin-like women displayed in windows like bread at a bakery. It’s probably a great place if you’ve never seen the internet before.

I made my way to my hotel via train, tram, and foot, and finally arrived around 8 o’clock at night. The hotel was located in the westside of the city in an area called Hoekenes. This side of the city is reminiscent of Queens, NY- it’s urban and suburban at the same time; it seems to be a nice, quiet area. I had literally purchased the hotel room less than 24 hours before while I was waiting around in Florida at my girlfriend’s place. It was less than $100 for two nights through some discount travel website, but it wasn’t that bad of a hotel; kind of like a European version of a Holiday Inn in the states; similar to the Park Inn chain that’s ubiquitous throughout Europe.

After sleeping for a few hours, I eventually decided to make my way downtown. Since I had finally gotten ready after midnight local time, I had to take an hourly “nachtbus” to the city center to explore instead of a faster and more regularly scheduled tram. I had no idea where I actually wanted to go or wanted to see since it was so late at night, I just knew my main goals were to get a bite to eat and to not get mugged (I had no idea whether or not Amsterdam was safe or not).

After 30 minutes or so, I arrived at the city’s main train station. On the outside, some might call the train station beautiful, but in my mind, it looks like some architect in the 1800’s drafted a gigantic, featureless brick building, then some interior designer from that same era decided to vomit gothic elements all over the architect’s blueprints. That’s about all there is to say about that.

I had no idea where to go, so I did what I usually do when I’m visiting a foreign town for the first time; I just started following the biggest groups of people. I eventually happened on a main street with several souvenir shops, coffee shops, “coffee shops” (aka sophisticated weed spots), and places selling typical European “midnight food” as I call it: gyros, pitas, and of course, a collection of Mc Donald’s and cheap pizza places.

It only took me a little bit of walking to realize that my favorite European city (Copenhagen) really was designed as a knockoff of Amsterdam- even after the obvious comparison of being two liberal cities built on the water. The only difference is choice of vice; where Copenhagen has alcohol, Amsterdam has weed and other drugs; where Copenhagen has Scandinavian-styled feminism, an extremely overeducated populace and the world’s highest taxes, Amsterdam has legalized and taxed sex trade. Choose your evil.

The end of this story is that I ended up following the crowd to the infamous Red Light district, which is a collection of (probably) drugged-up and (most likely) human-trafficked scantily-clad mannequin-like women displayed in windows like bread in a bakery. It’s probably a great place if you’ve never seen the internet before.

I ended up eating a pita somewhere, going back to my hotel, and spending the rest of my 72 hours in Amsterdam going to the Heineken factory, visiting museums, getting kicked out of museum openings, being frustrated that Amsterdam has even more Americans than “home” in South Florida, and getting snowed into the airport. But that’s a story for another day.

Author’s note: I feel somewhat proud; I wrote this entire narrative without mentioning tulips, windmills, or bicycles once. Also, I made the mistake of visiting Amsterdam in March, which was the reason for the terrible weather. Don’t visit Amsterdam in March.

Like travel writing? Subscribe to our newsletter to keep posted and for special IGB travel-related deals! Just fill out the form below .

Amsterdam: 4 Quick Tips For Your Visit 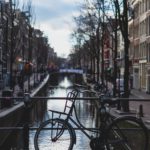