“Travelling while black” is often more of an experience than the destination itself.

“…so I can vacay where there ain’t no channels/

and it’s quite okay for a gangster to wear sandals”

The greeting startled me a bit, but I cocked my eyebrow and turned aside slowly to address the baritone voice, as if I had been prepared for its arrival all along. Maintaining my black man cool was paramount, even overseas.

“Boh-jyuh” I replied, attempting to slur the word as Frenchly as possible.

I finally looked up from the menu and gave the waiter the once-over. He was classically dressed in creased black pants and a black work apron that contained a small lined notepad and three pens. This nod to convention contrasted with his white sleeves, which were messily rolled up and cuffed in a workmanlike manner. The waiter’s stern, polygonal face, rugged jaw, and “Zidane“-like shaved head made him the most French-looking man I could’ve imagined.  That head was home to a caricature that seemed deliberately twisted into a look of expert consternation in the manner of Parisian waiters. But this was the South of France, and I found it a little silly that he was so stern-looking here; Nicean people are generally much more friendly to tourists than Parisians are.

Before I could think of how to make conversation and ask him where he was from- as in really from, he spat something out in French. I think he was asking me what I wanted to order.

So I spat something else out in return: “Je ne parle pas français“. After all, there was only so far you could go in a conversation using phrasebook and duolingo terminology, and my best efforts were reserved for flirting with the local girls, anyway. I knew that if this guy was actually Parisian, or considered himself so, this step would probably expedite the consternation that the French usually reserve for Americans, but at least we would both understand that I was handicapped here.

Before he could falsely apologize for speaking in French, I continued: “May I have a glass of water with gas, and a mozzarella and tomato panini? Merci”. I was openly disgusted with my dislike of many of the restaurants in this portion of France to the point where I was disgusted with disgust. Why pride yourself on serving knockoff Italian food when this is literally the home of Niçoise cooking? That’s like someone’s uncle getting on the grill on July 4th or Juneteenth back home with beer in hand and Frankie Beverly and Maze blaring- then serving French food.

Responding to my request, the waiter drew his head back as if smelling something odorous. “Ahh” he said, furrowing his brow, “Are you… Ah-merry-kane?” he asked, snidely and Frenchly.

“I live in America, yes, but I don’t consider myself American.” I spoke slowly and articulated my words curtly so he would have time to comprehend.

“Ahh, I see.” He said, while nodding his head as if to roll his eyes. He must hear that all the time. Especially when we have a republican president.

“Well see, I am from Trinidad”, which was only slightly true, because I was born in America, and have enjoyed much of the black American experience throughout my life.

In my mind, I was shocked that he knew there was a ski resort town in Colorado named Trinidad. Most Americans don’t even know that- but not out of geographical ignorance. It’s simply a small town. But I didn’t let it on.

I offered a fact as an olive branch. “No, Trinidad and Tobago. It’s an island in the Caribbean. We were actually ruled by France for some time, which is why my family name is French. My grandparents actually spoke Fr-“

“Ehh.. In zee Caribbean? Near Jamaica?“

So he wasn’t as geographically educated as he let on.

“No, closer to South America than Jamaica“

His expression softened a bit. “Ahh, mar-LEE! Bob mar-LEE!” he exclaimed, each time accenting the second syllable of Bob’s last name as if he had been punched in the gut. Now it was my turn to nod my head in an eyerolling way “yes, Bob Marley”, I said, somewhat ceding the conversation.

“…that’s like someone’s uncle getting on the grill on July 4th or Juneteenth back home with Frankie Beverly and Maze blaring- then serving French food.”

That’s when I realized that it might have been a better idea to just say I was American and talk about my involvement with hip-hop, if I didn’t want the atypical “Bob Marley” response. I had learned that young French people probably have more respect for the artistry and musicality of hip-hop than Americans do. Worldwide, though, Marley’s fame trumps that of anyone in hip-hop, except perhaps Will Smith. And of course, that’s not hip-hop or TV star “Fresh Prince” Will Smith, but movie star Will Smith.

Nevertheless, I enjoyed a lovely lunch. The restaurant’s patio faced the ocean on one side and the famed Promenade des Anglais on the other, and while simple, likely qualifies as the most beautiful place I’ve ever eaten. The sun was shining and the warm Mediterranean breeze was rolling about during the entire course of my meal. My panini was larger than I expected, and “hit the spot”, as they say, and even the side salad (I joked with myself it was not even salad niçoise) was delicious. Letting my server assume I was from Jamaica was probably a smart move, because the glass of cognac I ordered after eating seemed to be a little more full than usual. Once I paid and was prepared to leave, my waiter was near the entrance waiting to see me off.

“Hey, thanks a lot, man” I said, half-dapping the server. “I appreciate your service.”

The waiter unsettledly glanced around before continuing, which caused me to also look around too to see what he was looking for.

“Eef you are looking, I know where to get the best Bob Marley een south of France.”

He said all this under his breath, smoothly tapping his lips twice with the thumb and second finger of his left hand with his palm turned outward, conveying a universal code. I noticed that he had a small piece of paper in his right hand, which probably had a phone number or address scrawled on it. Or perhaps it was a rolling paper. Or all of the above.

I thought for a minute and smiled, delicately brushing the offer aside. Then, something about the cognac kicked in, and I decided to confront the stereotype. This wouldn’t be so hard, I decided, because the young man’s bright, handsome eyes and bushy eyebrows betrayed the fact that he was probably of Arabic descent.

“Hey, let me ask you a question. Where are you from?”

“…you feel a lot freer to do what you want abroad, even in a place like France, where racial problems are as crucial to modern French identity as baguettes.”

“Ehhh… I don’t understand you“

I looked into his eyes, and paused for effect. “Is that really the truth? Where is your family really from”

He shifted his position a bit. “My family is from Algeria.” He said this even more quietly than the “Bob Marley” thing earlier, as if it was shameful. In fact, I know that with the xenophobic state of many of the nations in Europe, this was a fact that could truly prove detrimental to his career.

“I know people here say things about Algerians that are not true, and you probably don’t like them. You know those things don’t mean anything to you. So why do you think everyone from Jamaica likes the… Bob Marley”, also gesturing toward my lips with two fingers. “Sometimes it is hurtful that people think this is all we do.”

The waiter paused for a moment and contemplated what I said. “Ah. I understand. I am very sorry.” I saw a look of true remorse in his eyes. I also felt the burning sensation inside of proudly defeating a stereotype that day. He extended his hand for a handshake, and I returned the gesture. Then I left.

Truth be told, I wish the waiter had the understanding of English and I had the balls to actually say all that, but the interrogation of my server’s national background never happened, and my overture definitely never happened. This was Nice, today was Friday, I didn’t have to worry about my job, and I didn’t have sh*t to do, but most importantly, I was here running away from the stresses of home. So I took the paper he gave me while shaking my hand, then went about my merry way.

That’s one of the beautiful things about traveling. Unlike in America, where every “sensible” black person wears the burden of not conforming to stereotypes around white people and always having to “behave”, you feel a lot freer to do what you want abroad, even in a place like France, where racial problems are as crucial to modern French identity as baguettes. In America, I would’ve been conflicted about  fulfilling a stereotype and such, but abroad, you think to yourself while rolling a spliff, “well, no one can change 7 billion minds, but Bob mar-LEE is something that brings everyone together”. 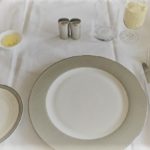 Flying Internationally? Special Order One of These Meals for a Better Flight

04 comments on “A Black Experience in The South of France”