Our writer learned the hard way that love in your favorite city can ruin that place forever… but that’s just fine.

Here’s a travel tip: don’t ever re-visit a city if you’ve been in love there. You’ll discover that your lover has stolen that city from you, and there is no way to reacquire that city’s wonder without them. You can even try to duplicate the feeling, but in the words of Sade, “It’s never as good as the first time”.

I’ve probably been to Barcelona 6 or 7 times; which has been more than enough time for the city to establish itself as one of my favorite places. Recently, I was there at the same time as a woman I’ve been interested in for years, and love bloomed in that reckless and exhilarating way that only occurs in romantic comedies and real-life vacations.

I showed her my favorite places to eat, and she introduced me to her expat college friends from back home who had originally coerced her into coming. We partied, drank, stared each other in the eyes and held hands; all that cute stuff. She neglected the friends that she came to visit; I neglected my work responsibilities. We addressed other travelling couples as if we had been part of their number for years. We whispered promises about the future to each other that we probably shouldn’t have. We peacocked around la Rambla as if it was our personal runway, and posed at the center of Plaça de Catalunya as if we were due to be coronated there. We joked about someday getting hitched at Gaudi’s stunning Sagrada Familia, but only when it is finally finished. In the end, it was all good because it was Spring in Barcelona.

This story doesn’t end like those corny movies though, more like one of the serious ones that no one watches that ends up winning an Oscar. Back home, she said it “just wasn’t the same” after a few months of trying, and we’ve since maintained a tenuous, if not strained friendship. In the meantime, I’ve had to withdraw from the intoxication of love. A special word of thanks goes to whiskey for its unwavering support of this ambitious endeavor.

Now, I’m back in Barcelona for another work trip, and half a season removed from that little amatory jaunt. I’m currently clad in my city-walking uniform- that is, a grey Nike sweatsuit and staid facial expression- mindlessly and aimlessly walking the streets at night in a borough of the city that she and I never even stepped foot in together. This time, the sight of people enjoying themselves in cafes feels like a special type of torture instead of an invitation to join, and I’m low-key jealous of the brother who, confidently arm in arm with his swooning girlfriend, gives me the silent “what’s good?” nod while passing me by.

I’m not sure if what I’m feeling is a deeply emotional shift in perspective, or that gloom that reminiscence sometimes lends to us; or perhaps it’s a type of lust. See, now that I’m older, I understand that lust in its most basic form is almost always a “grass is greener” type of situation, instead of the primitive “I want that and don’t know any better” experience that we usually make it out to be. So this could’ve been a lust to be a person in love again, instead of simply being an observer.

Shoot, you never know if that guy was walking arm-in-arm with his girl passed some single black guy in a grey Nike sweatsuit and thought ” I wish I could be free like that in this city”.

Have you ever experienced something like this before? Tell us about it in the comments section.

Miami’s Charming “Dive Bar of Sushi” is Worth The Wait 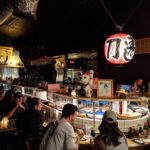 Is Carbon-Neutral Air Travel Possible? We Evaluate the Media’s Alternatives (Because You Totally Asked Us To)